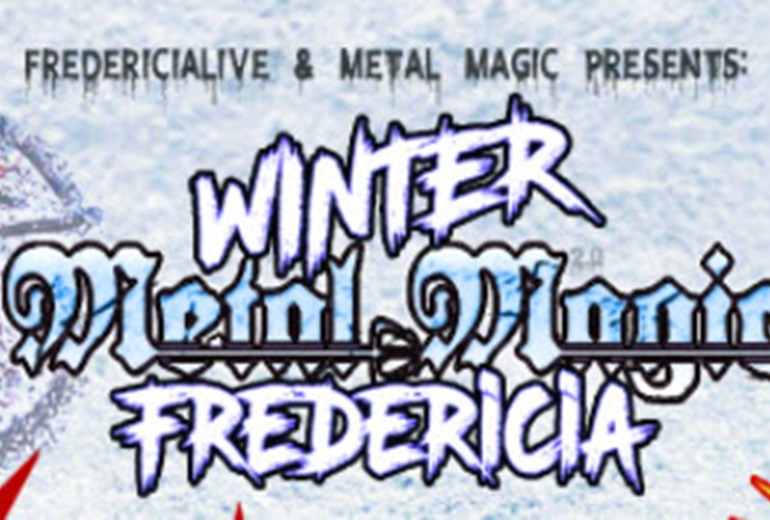 In collaboration with Metal Magic we announce Fredericia's first two-day indoor metal festival! With Eksercerhuset as venue, the festival will be able to accommodate up to 1.000 guests, and the programme will present both local, national and international artists! The programme is announced regularly in an updated version, and ticket sales have already startet!

ONLY PARTOUT TICKETS FOR SALE, VALID FOR BOTH FRIDAY THE 21ST. AND SATURDAY THE 22ND. THE PRICE IS DKR. 666,- INCLUDING FEES.

Warm-up with Claudio Simonttis Goblin (IT)

Thursday, Februrary 3rd. Goblin will play a horrorkoncert in Fredericia. If you have bought a ticket to Winter Metal Magic Fredericia, you will get a membership price for this koncert!

Norwegian legends of extreme metal! Widely recognized as one of the originators and biggest names of the Norwegian second wave of black metal, Enslaved are known for both legendary early releases such as Frost and Eld as well as the progressive ilk of metal they have positioned themselves into over years and years of evolution. While always firmly based in black metal and viking lore, Enslaved now look back on three decades at the forefront of exploring new boundaries and is one of the most accomplished Norwegian bands in existence. We are very much looking forward to see the band in Fredericia for the first time!

When you’re asked about the “big three” from Germany, you’ll immediately think of Sodom, along with Kreator and Destruction - at least if you’re enthusiastic about so-called teutonic thrash metal. Sodom have been at it since 1981, with vocalist/bassist Tom Angelripper being the consistent pillar through forty years and sixteen studio albums. The latest of these, Genesis XIX, was released in 2020, so expect some fresh material delivered along with classics like Agent Orange in this top-tier teutonic thrash tantrum. Sodom will headline Friday 4th February!

AT THE GATES:
Swedish masters of melodic death metal! Legendary At The Gates are known as pioneers of the Gothenburg melodic death metal sound, and are without doubt one of the absolute juggernauts of the Swedish metal scene. Having released classic albums like The Red in the Sky is Ours and Slaughter of the Soul in the early and mid nineties, the band dissolved in 1996 - but reformed in 2007 with the Slaughter of the Soul lineup. They have since released three albums and done a massive amount of touring, so expect a class act show with plenty of evergreen material from these experienced gentlemen.
DHG/DØDHEIMSGARD:
Norwegian madmen of avantgarde Black Metal! Dødheimsgard, often abbreviated DHG, have long been considered grandmasters of the very fringes of black metal. After releasing two conventional - though highly acclaimed - albums, they went full-on beyond with the groundbreaking EP Satanic Art, which pretty much sounds as if it was recorded in a mental asylum, and never really looked back since - culminating so far in 2015’s brilliant work of madness, A Umbra Omega. After having a regular roster of star vocalists like Fenriz, Apollyon, Aldrahn and Kvohst, band mastermind Vicotnik has now taken over vocal duties and is ready to send us all to the madhouse, when they return to Fredericia next winter!
SØREN ANDERSEN:
A masterful guitarist and a true rockchild of Fredericia, Søren Andersen is a man who’s been around: he’s playing with Glenn Hughes, he’s played with Mike Tramp, and he’s been involved in the production of a long list of rock and metal albums, from artists like Artillery, Pretty Maids, Tygers of Pan Tang, Essence and so on. But Søren is also an accomplished solo artist on his own terms, and this winter, he and his amazing band will be treating us with some groovy instrumental hard rock cuts from his new album Guilty Pleasures. While not as metal as the majority of the festival roster, Søren has decades of experience when it comes to getting a crowd moving, and the guitarists among you especially are in for a treat.
UNDERGANG:
Kings of Danish Death Metal! Denmark has a long-standing tradition of old-school straight up Death Metal, and Undergang are proudly honoring this legacy the best way possible. Starting out in 2008 and having released five albums since then, Undergang from Killtown Copenhagen are a strange combination of a breath of fresh air in the scene and the very exact opposite. Rotten, filthy and almost completely decomposed, Undergang are obsessed with death and morbidity, and their low-end brand of death metal will entangle your soul and its will to live! Death awaits you!
WITCH CROSS:
The band stood out in a period with many Danish bands hailing the darker sides of the religious spectrum like Mercyful Fate and King Diamond or pure AOR/melodic acts like Fate or Hero with a style that combined melodic power rock with social commitment and statements concerning the society! Even though Witch Cross had started out with rubber skulls and satanic altars etc. on the stage the band soon became know as the "smiling heavy metal band" of Denmark.
THE RITE:
This new monster of a band is a diabolical Danish / Italian cooperation between Denial of God and Black Oath.